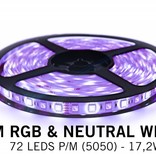 This versatile RGBW strip contains A-quality LEDs and leaves many other RGBW LED strips behind with its long life span, bright SMD 5050 RGB / WW LEDs and the use of high quality components.