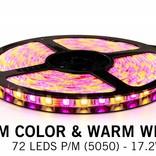 RGBW LED strip with 360 LED's, specially manufactured for us to our specifications.
With 20% more LED's than other RGBW LED strips, you have a beautiful bright warm white (3000K) base lighting and you also have 180 multicolor RGB color LEDs available on one strip!
The mix of warm white and color gives this RGB+W LED strip a highly sophisticated color spectrum that is gentle on the eyes.
Mixing the 180 warm white (WW) LEDs together with 180 color LEDs (RGB) allows wonderful combination possibilities.
This versatile RGBW strip contains A-quality LEDs and leaves many other RGBW LED strips behind with its long life span, bright SMD 5050 RGB / WW LEDs and the use of high quality components.

Add your review
5 stars based on 1 reviews